The activity began with the passion of the Gambarotto-Coccato family in 1970 in San Donà di Piave, a town in the Veneto hinterland, thanks also to the presence in nearby towns (especially the Riviera del Brenta) of skilled artisans who contributed over time to make them a real district. 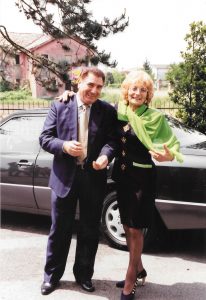 The activity was born from an idea of ​​Coccato Luigi and his wife Bruna Gambarotto, and gained fame and notoriety both from the activities of the markets in the various squares (Jesolo, Caorle, Bibione, Lignano), and in the foundation, in 1982, of the first shop located in the beautiful seaside town of Bibione on the Adriatic coast. 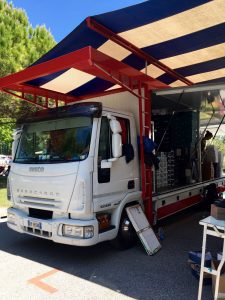 Thus was born the KL SHOP Calzature, dedicated to the two daughters Ketty and Ledi; the latter continued and continues the commercial activity with her husband Achille Nicastro. The Tuscan origins of the latter also included the activity in the well-known Consorzio del Forte dei Marmi that organizes itinerant markets in the main squares throughout Italy.

Markets, autumn and winter fairs, summer season on the beaches of the Riviera: success and fame continues today thanks to the son Steven Nicastro and the opening of the first outlet called Camminiamoci Dentro! A temporary store started in 2016 in the same place where his grandparents had their little shop downstairs years ago. 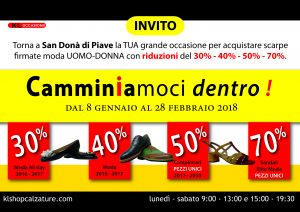 Camminiamoci Dentro! it was also proposed again in the course of 2018 with great satisfaction and experience from the whole family.

From the 70s to today, the company has been the main Italian brands operating in the footwear sector, guaranteeing high quality and fashion: the main values ​​of our Made in Italy products.